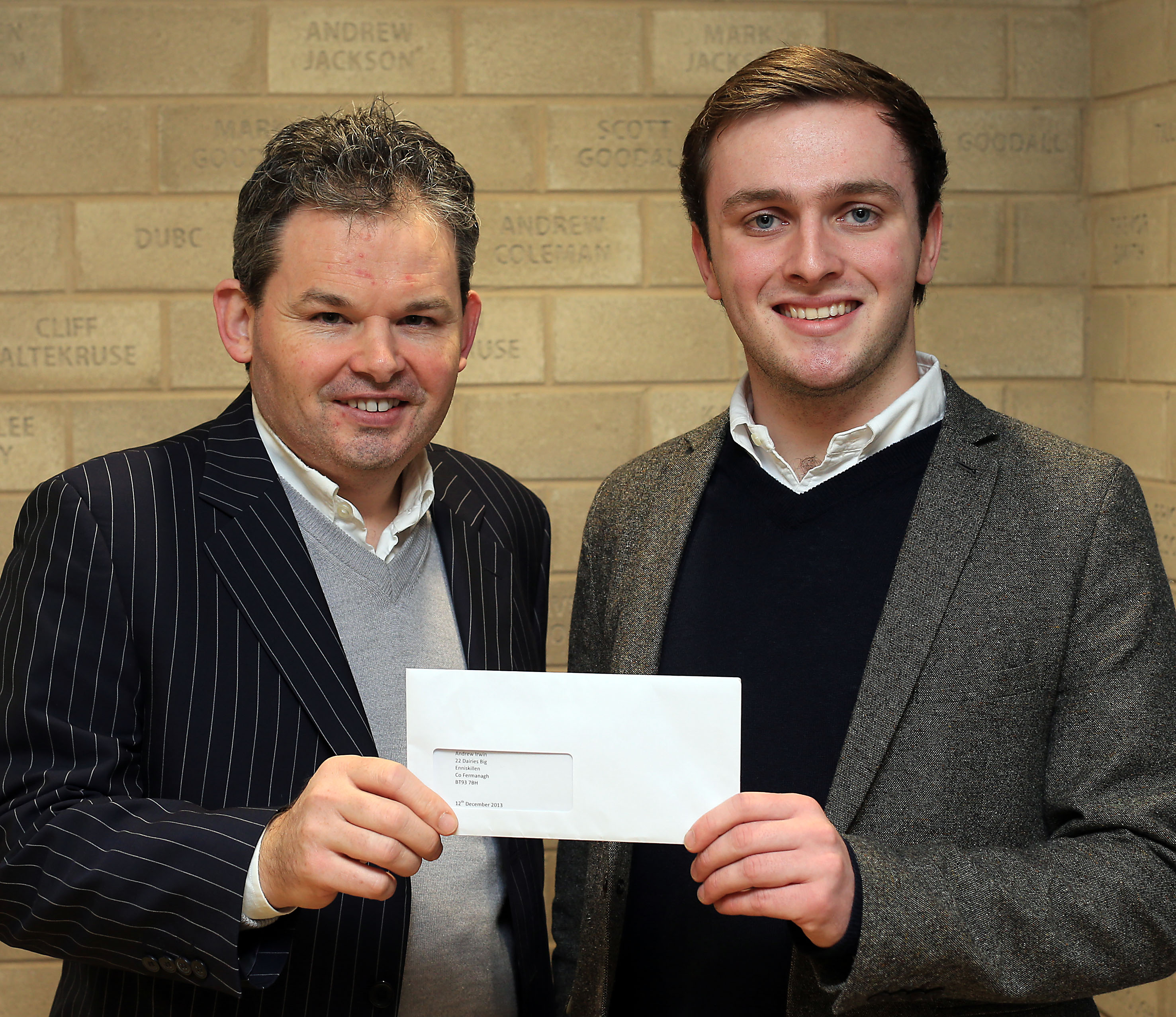 Director of Fermanagh Trust, Lauri McCusker presenting Andrew Irwin with his bursary.
Other recipients were William Graham and Jordan Hylton

Three local talented individuals have this year been awarded Greg Turley bursaries. William Graham, Andrew Irwin and Jordan Hylton have track records at being top class in their chosen fields and have all the qualities to become excellent ambassadors for Fermanagh.

Andrew Irwin is currently in his second and final year at Chetham’s School of Music in Manchester in order to pursue a professional classical singing career. It was a big step to undertake the rigorous and challenging routine of a prestigious specialist music school with expert tuition, but it is clear from his school reports that he has applied himself wholeheartedly, making considerable strides and is on his way to achieving his dream. Previously Andrew won Young Singer of the Year two consecutive years at the Fermanagh Feis and he uses every opportunity when he comes to Fermanagh to perform.

16 year old Devenish College pupil William Graham is a member of the Irish Football Association Powered Wheelchair Squad and has been fortunate enough to have been selected to play in competitions in Dublin and Limerick. His team finished runner up in the all-Ireland league and then went on to win the prestigious Harmony Cup when he was voted player of the tournament. In recognition of their achievements the players were invited to Windsor Park to do a lap of honour during Northern Ireland’s world cup qualifying match against Russia. With a dedicated training schedule, William hopes to be selected and given the opportunity to take part in the UK Championships.

Jordan Hylton, already a successful athlete having represented the Northern Ireland School’s team in the UK games, has been selected for the Ulster U18 Schools Rugby Squad to participate in their Inter Provisional Series. Jordan is fully committed to training which involves a huge amount of travel and may be as many as five days per week in addition to fixtures on Saturday mornings.

Lauri McCusker, Director of the Fermanagh Trust said “Greg Turley was a unique individual who contributed so much to the lives of others; so much so that these Awards were established as a way of perpetuating his memory and of continuing his work of helping others in a practical way. We hope this funding to William, Andrew and Jordan will help them towards securing their ambitions. They are talented, highly motivated, ambitious and committed and we wish every success in the future”.