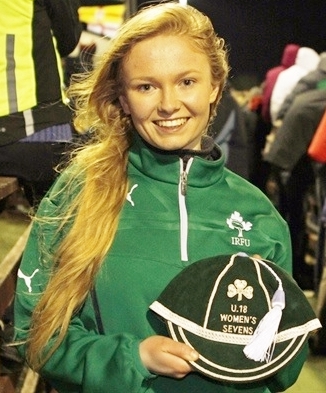 Congratulations to Kathryn Dane on receiving her first international cap, for representing the Ireland Girls 7s squad in Sweden last year. Kathryn was formally presented the cap in front of a large crowd at half time of the Women’s Six Nation Game against England at Ashbourne RFC.

In February the multi-talented hockey, rugby and football player won ‘Young Sports Personality of the Year’ sponsored by the Greg Turley Bursary Awards as part of the Impartial Reporter’s Celebration of Sports Awards.

A number of Kathryn’s successes to date on top of representing Ireland Girls Rugby 7s at FIRA European Championships include playing hockey for Enniskillen 1st XI and being part of the Northern Ireland U17 International team at UEFA Elite Championships. Kathryn also won the Ulster Cup with Enniskillen Ladies U18s, Fermanagh Mallards Division Three Cup Final and the Tag Rugby Ulster Championship with the Collegiate Team.

Lauri McCusker, Director of the Fermanagh Trust, which administers the Greg Turley Bursary Awards said “This is fantastic news for Kathryn. She was indeed a worthy winner of the Young Sports Personality of the Year and is an excellent ambassador to Fermanagh’s young sports stars. Kathryn has incredible talent and no doubt has an even brighter future ahead.”

The Greg Turley Bursary Awards were established after the death of the popular and inspirational St Michael’s College teacher as a way of perpetuating his memory, and of continuing his work of helping others in a practical way. The awards support young people in the fields of community service, sport, music and drama. For more information CLICK HERE

The Callagheen Wind Farm Fund, administered and managed by the Fermanagh Trust is open for applicat...