The first Joan Trimble Bursary, following a re-launch of the scheme was awarded to St Michael’s College student Jason McAuley in November. Since then things have been progressing well for the promising young musician. See below Jason's story so far. 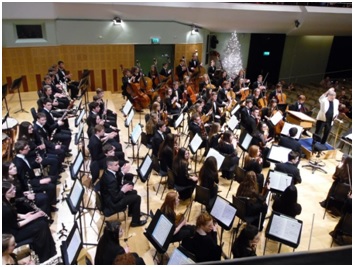 "I was recently fortunate enough to be involved in my first National Youth Orchestra of Ireland course, held over seven days in Kilkenny College. I was one of only four members of the Orchestra from Northern Ireland. It was an incredibly intensive course and we rehearsed for nine hours each day. The first two days consisted of focussed lessons with our instrumental tutors. I learned a lot from our Trumpet tutor Dave Collins who plays with the RTE National Symphony Orchestra and National Concert Orchestra.

As the week progressed the sections of the Orchestra began to work together in ‘tutti’ rehearsals and it was then apparent just how high the standard of the rest of the musicians were. The full orchestral sound was incredible. The Orchestra’s conductor, Gearóid Grant, is a renowned music educationalist who regularly conducts the RTÉ Concert Orchestra and National Symphony Orchestra. He was an inspiring conductor and the entire Orchestra seemed to share his passion by the end of the course.

The soloist on this year’s Christmas course and subsequent concert in the National Concert Hall in Dublin was Tuba player Les Neish.  He played a selection of Tuba solos which included; an amazing virtuosic piece originally written for Violin composed by Vittorio Monti; ‘Tubby the Tuba’ composed by Kleinsinger, which appealed to a broad range of  musical tastes;  and the 2nd movement of the Vaughan Williams Tuba concerto.

In the second half of the concert we played Dvorak’s 7th Symphony. The performance of this piece was remarkable as it was the first entire orchestral symphony I have performed. The Concert was, without any doubt, the most memorable I have ever performed in and the feeling after the concert was incredible.

In April I will be lucky enough to participate in a two day workshop with the trumpet section from the New York Philharmonic Orchestra who are on tour in Dublin and in July the National Youth Orchestra of Ireland are going to Portugal to participate in the Lisbon Music Festival and I cannot wait to go. I would like to thank the Music Department in St Michael’s College, my teacher Simon O’Hare and the WELB Music Service for their continued support, and also the Joan Trimble Bursary Awards for the generous bursary which made membership of the NYOI accessible to me."

Young apprentices who are part of the Fermanagh Trust’s ‘Grant Maker Apprentice Program...

Organisations in Brookeborough have received a funding boost from the Teiges Wind Farm Fund to supp...

The local communities in Drumquin and Killen have received a huge funding boost from Energia, owner...

The Fermanagh Recreational Trust continues to support the County’s sporting talent and is cur...

The Joan Trimble Bursary Awards continue to support local musical talent and is currently open for ...