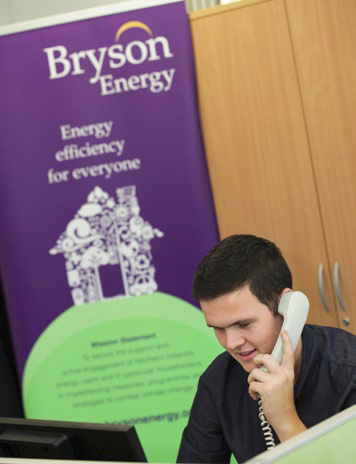 Bryson Energy is one part of the Bryson Charitable Group, Northern Ireland’s leading social enterprise with staff based in Enniskillen, Derry/Londonderry and

Belfast. Formed in 2007 it became the new name for the Northern Ireland Energy Agency. The main role of Bryson Energy is to provide energy advice and energy measures to homes across NI. Its mission statement is ‘To secure the support and active engagement of Northern Ireland’s energy users, particularly households, in implementing strategies, programmes and measures to combat climate change.’

Liaising with and working alongside a range of partners including the Housing Executive, Fermanagh District Council and the Public Health Agency, Bryson Energy provides a valuable service to residents in Northern Ireland. Bryson Energy with a direct workforce of 49 people, of which 10 are based in Enniskillen, is committed to tackling fuel poverty and its long term aim is to energy proof homes across NI. It also indirectly supports a further 50 jobs with Bryson Energy delivering over twenty separate programmes and initiatives to meet their core objective of making homes more energy efficient. These include the Warm Homes scheme which is the largest of Bryson Energy’s projects, the Bryson Energy Advice Line and Cosy Homes Insulation among others.

The Warm Homes Scheme means warmer, healthier and more energy efficient homes. Under this scheme homes are given insulation and heating measures such as solid wall, new cavity wall insulation and loft insulation as well as replacement jackets for hot water tanks. Certain eligibility criteria are required for this scheme but generally those on low incomes or in receipt of benefits may be eligible. Bryson Energy uses a number of subcontractors to deliver the measures, putting money into local communities through local employment.

Funding has been provided to Bryson Energy by local councils along with the Department for Social Development through the Housing Executive for a new impartial advice service helpline. This ensures that all households in Northern Ireland have access to local, free and impartial energy advice. Advice can also be given on grants; cash backs and offers which households may be entitled to. In the year 2010- 2011 the company provided advice to over 115,000 households across Northern Ireland.

Energy Efficiency Education programmes are also run by Bryson Energy to help young people understand their relationship with the environment and by doing so aims to preserve the environment for future generations. Energy awareness is also promoted at public events, in schools and in tenants own homes. Bryson Energy also facilitates the delivery of practical improvements such as loft insulation and solid wall insulation to improve domestic energy efficiency.

Those living in poverty and vulnerable groups such as the elderly and the long term sick benefit greatly from the work of Bryson Energy by having their homes energy proofed. Those who live in isolation in rural areas have also benefitted from the schemes run by Bryson Energy, and they hope to continue this work into urban areas starting with South Belfast.

By providing a service of reducing energy waste and energy proofing homes they are improving the health and general wellbeing of householders across Northern Ireland. At the same time they are playing a crucial role in changing people’s attitudes and behaviours towards the environment. Given the current economic climate and the continuous rise in fuel prices, the work of Bryson Energy is paramount to the health and wellbeing of the people of Fermanagh, particularly those who are socially and economically affected.