The National Lottery Community Fund is investing £500,000 into a major project to identify and develop leaders, to help secure a positive future for the voluntary, community and social enterprise (VCSE) sector in Northern Ireland.

Fermanagh Trust in partnership with Holywell Trust in Derry/Londonderry and the Rural Community Network a regional support organisation that is based in Cookstown, is delivering ‘Community Leadership in the West,’ an ambitious five-year project which includes new and specific qualifications that support the next generation of leaders, to build their capacity to respond and react confidently to the challenges they face and give them the skills they need to make sure community voices are heard when working with statutory organisations. 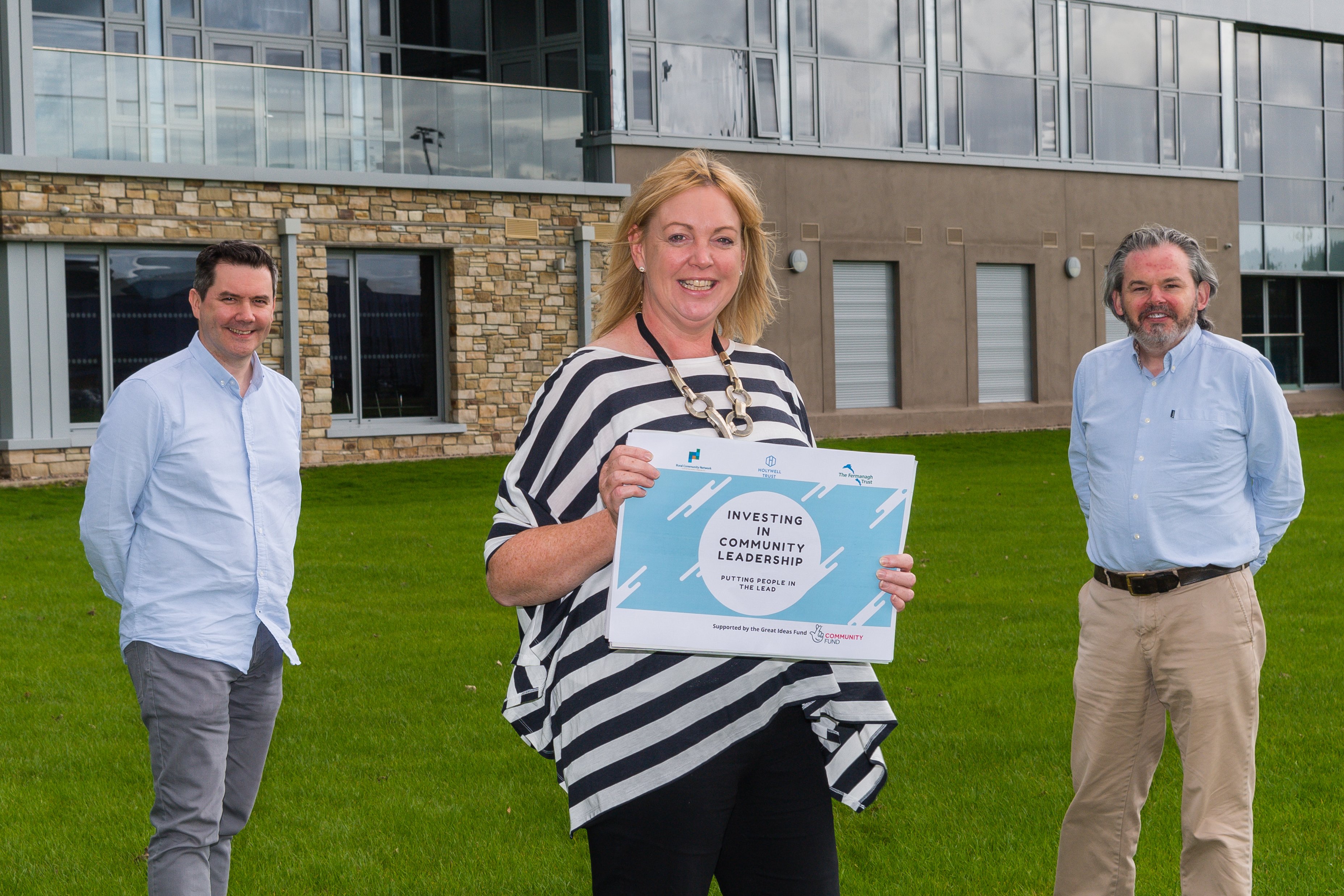 Gerard Deane, Director of Holywell Trust in Derry/Londonderry, Kate Clifford, Director of Rural Community Network and Lauri McCusker, Director of Fermanagh Trust in Enniskillen, who are coming together thanks to a £500,000 grant from The National Lottery Community Fund.

A survey carried with 120 organisations in the West in May 2020 showed that young people are largely underrepresented in the governance of community based organisations, with the average age of committee members being 53. Nearly 50% of members have served on the same committee for over 6 years, highlighting the challenges of succession planning. 93.9% of respondents felt that the community would benefit if people were able to access professional community development qualifications locally.

Lauri McCusker, Director of Fermanagh Trust explained: “This is an ambitious project but has the potential to change the future of the VCSE sector in the West – particularly important as we continue to adapt to the challenges around COVID-19.

“The need for engagement with communities on big issues like Brexit, capacity and the skills needed for leadership in communities is more important than ever. As government continues to localise decision making about things like health services, policing and education, it’s essential that local community leaders have the skills to influence those decisions.

“We are absolutely delighted to have been awarded this National Lottery grant at this crucial time, which will make sure the needs of communities are heard and represented where it matters in the future.”

Lauri added that the project would also look at succession planning within the sector: “Many projects in the West are led by older people, who are brilliant, but due to age or health issues, had to isolate during the pandemic. Some groups found it difficult to move quickly to meet immediate needs in their area due to lack of available leadership on the ground.

“But people have stepped up like never before and made a massive difference, and the aim of this project is to get more of this, support those who are making things happen and succession plan for the future, giving the next generation the chance they need.”

Barney Devine, from Cleenish Community Association in Fermanagh knows how important leadership is in rural areas. He said: “We are fortunate that we have terrific people in our rural community groups who really showed fast and effective leadership at the outset of the COVID-19 lock down and made a massive difference to the well-being of local people. Leaders from seven local groups from across the community including churches, the Orange Lodge and the local GAA club, rapidly came together and organised a community response service for the elderly and those who were shielding.

“Sixty-five volunteers were quickly recruited, a social media campaign and website put in place, leaflets printed and local shops and chemists brought in on the process. Communication within each of the groups was led by a local coordinator whilst a central coordinator sent out information between groups for requests for assistance.

“Community development activities that support community resilience such as this will be more important than ever as we face uncertain times. It is essential that organisations prepare for this and that we encourage and skill-up a new generation of civic and community leaders. This new leadership project will go a long way to achieving this and I am delighted it has now been funded by The National Lottery.

Kate Beggs, Northern Ireland Director of The National Lottery Community Fund said: “It’s inspiring to see new leaders rising to the challenges in communities, supporting people in need. It is great that the three partner organisations from across the West are coming together in this combined effort. This project sets a strategic direction, helping pave the way for the VSCE sector through succession planning for the future.

"National Lottery players can be proud to know that the money they raise is making such a difference across Northern Ireland.”

The Community Leadership in the West project is up and running and currently recruiting for:

Grant-Maker Apprentice Programme for young people working to effect investment and change in their communities
Future Leaders Programme which will create new non-political party aligned community leaders, dedicated to the promotion of positive good relations in Derry/Londonderry and beyond
25 key sector skills short-term training courses, resulting in 375 people being trained in the core building blocks to good practice including facilitation, mediation, governance and compliance.
A National University of Ireland, Galway, accredited Pre-Graduate Diploma in Community Development Practice, which will start in September 2021.

For more information on the Community Leadership in the West Project, please contact sonya@fermanaghtrust.org.