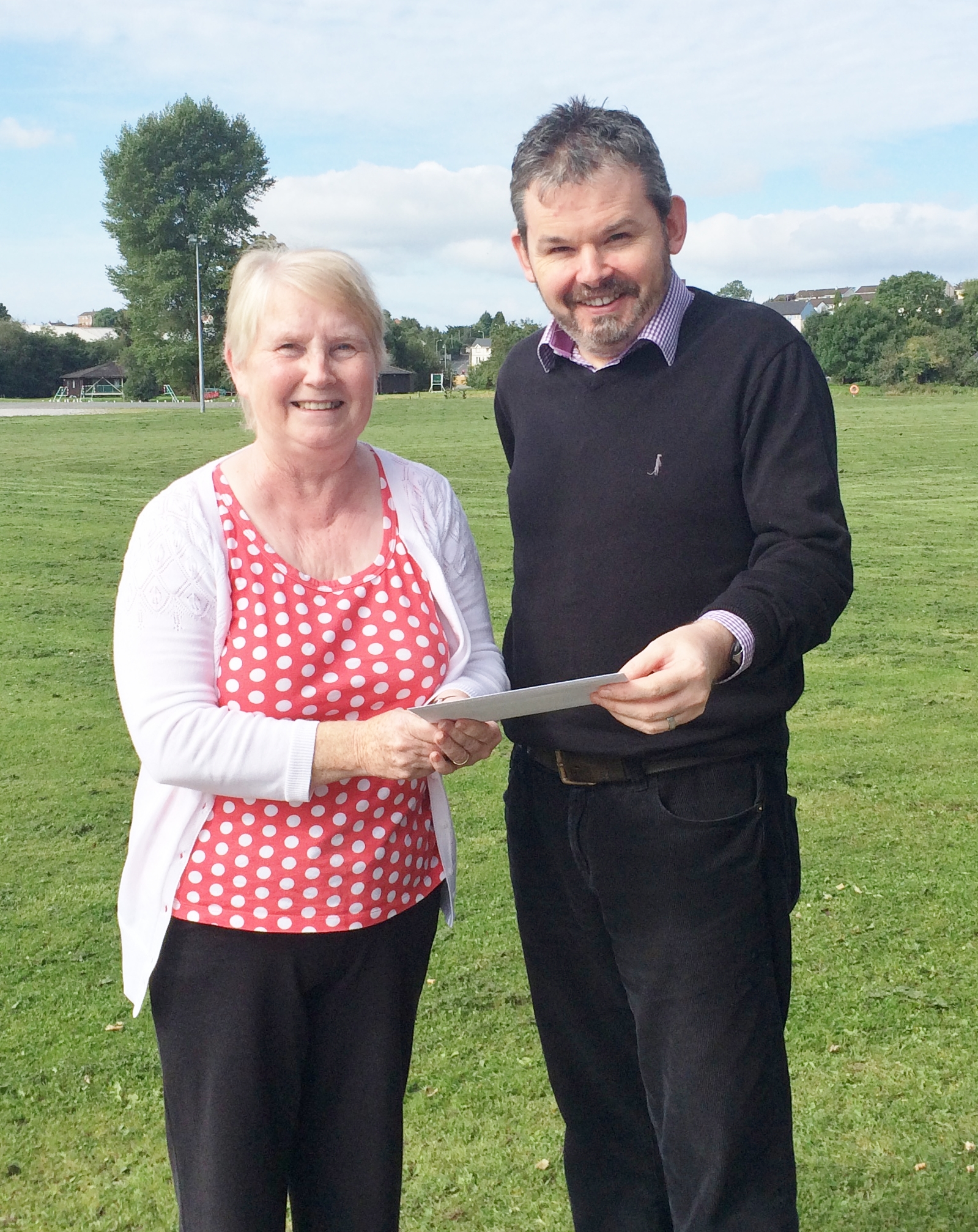 Margaret Judge, Treasurer of the Bellanaleck Local History Group receives
their cheque from Lauri McCusker, Director of the Fermanagh Trust

The FermanaghTrust have awarded a grant to Bellanaleck Local History Group, funding their project which focuses on an often – overlooked aspect of World War 1 history, namely the re-settlement of ex-servicemen on Cleenish Island in Upper Lough Erne. The project are having their official launch this Thursday (11th September) Village Hall 8pm.

Post WW1 a challenge presented itself on an unprecedented scale. Practical schemes were needed to help demobilised soldiers, many bearing the scars of war, physical and or physiological to integrate back into society. Most pressing was the need to provide housing at a time when there had been little or no tradition of public housing schemes.

Unusually, perhaps uniquely, an island with neither bridge nor utilities was the place chosen for one of those schemes. The housing scheme on Cleenish was one of many on the island of Ireland to cater for 80,000 returning soldiers. The scheme provided for the building of twelve houses each with thirty to forty acres of farming land. Of the twelve veterans selected, only one lived out his days there, his son and daughter now the sole inhabitants of the island.

Speaking to the BBC, who did a feature on the project in June, Marion Maxwell Secretary of the group said “The island is a hidden world really that very few people know about. It is a reminder of a forgotten era. Our Bellanleck Local History Group have taken on as a project finding out who these soldiers were. It may have been very soothing for them or possibly the loneliness of it may have been a disadvantage to them. That’s the kind of thing we are keen to try to know more about.”

The sturdy, double-storey houses have largely survived the ravages of time and stand as the only visible indication of the remarkably conceived scheme. The catch the imagination and prompt many unanswered questions about the original occupiers and their war-crossed lives.

The group’s project will involve establishing links with descendents of the soldiers to learn about their war service and flesh out their profiles. They will also collect photographs and other memorabilia, record reminiscences, mount an exhibition in the local hall. The group also hope to make a DVD and a printed booklet to preserve the project’s findings for future generations and for use in schools.

Lauri McCusker, Director of the Fermanagh Trust said “We are very much looking forward to the official launch of the project and wish the group well in finding out as much as possible about the occupiers of these homes. Bellanaleck Local History Group are a fantastic cross-community group devoted to studying, recording and raising awareness of the heritage of their locality and thus contributing to the enrichment of members and the wider community. This is a project which focuses on a unique and fascinating aspect of our local history, one which should be explored and one which we were keen to support. Well done to the group on their initiative and in particular the way in which they are involving the entire community in the process.”