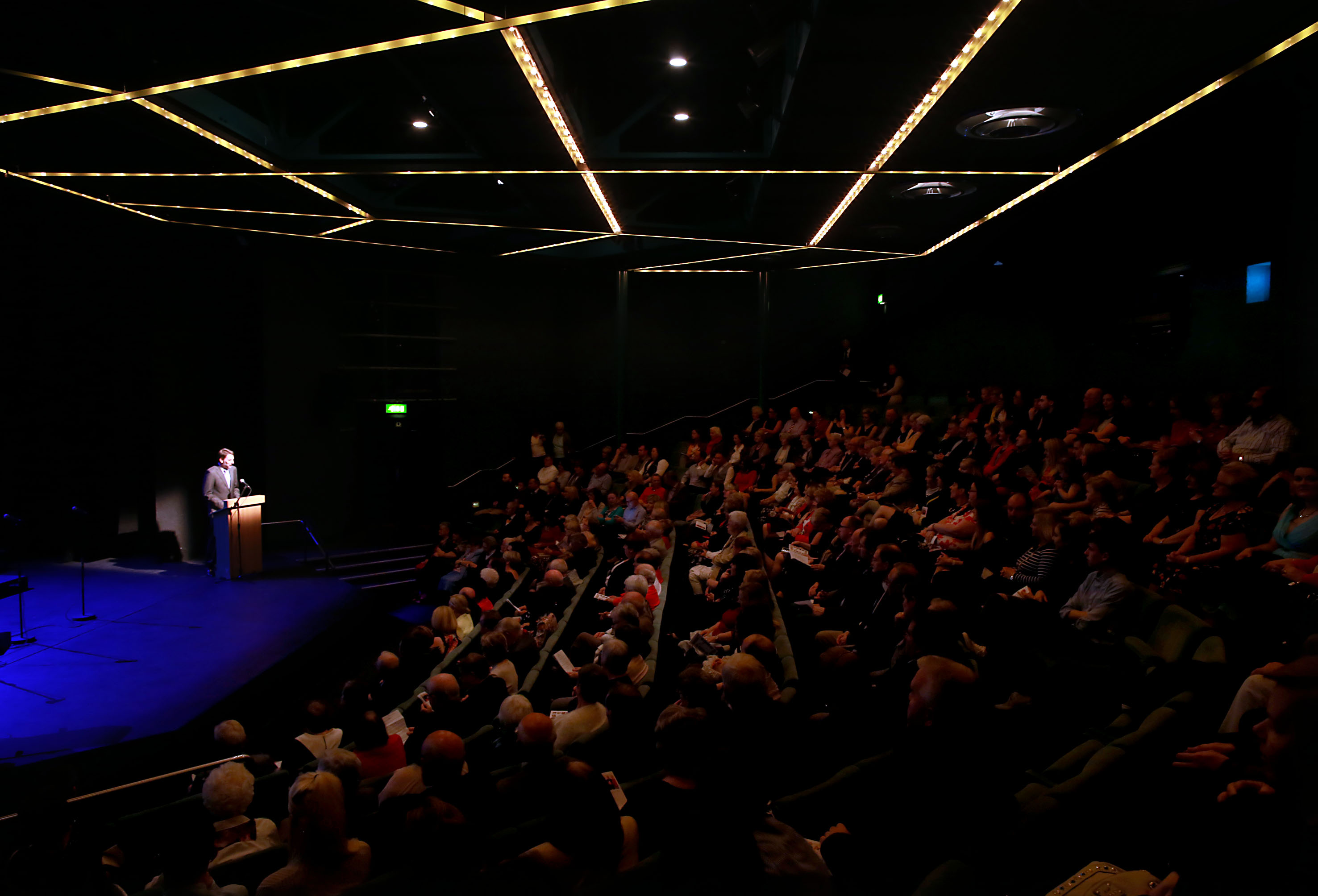 At a packed Ardhowen Theatre tributes were paid to inspirational volunteers who have made Fermanagh a better place to live. The event was hosted by Julian Fowler who said it offered a wonderful opportunity to shine a light on some of the many wonderful volunteers who work within the community and sing the praises of the otherwise unsung. 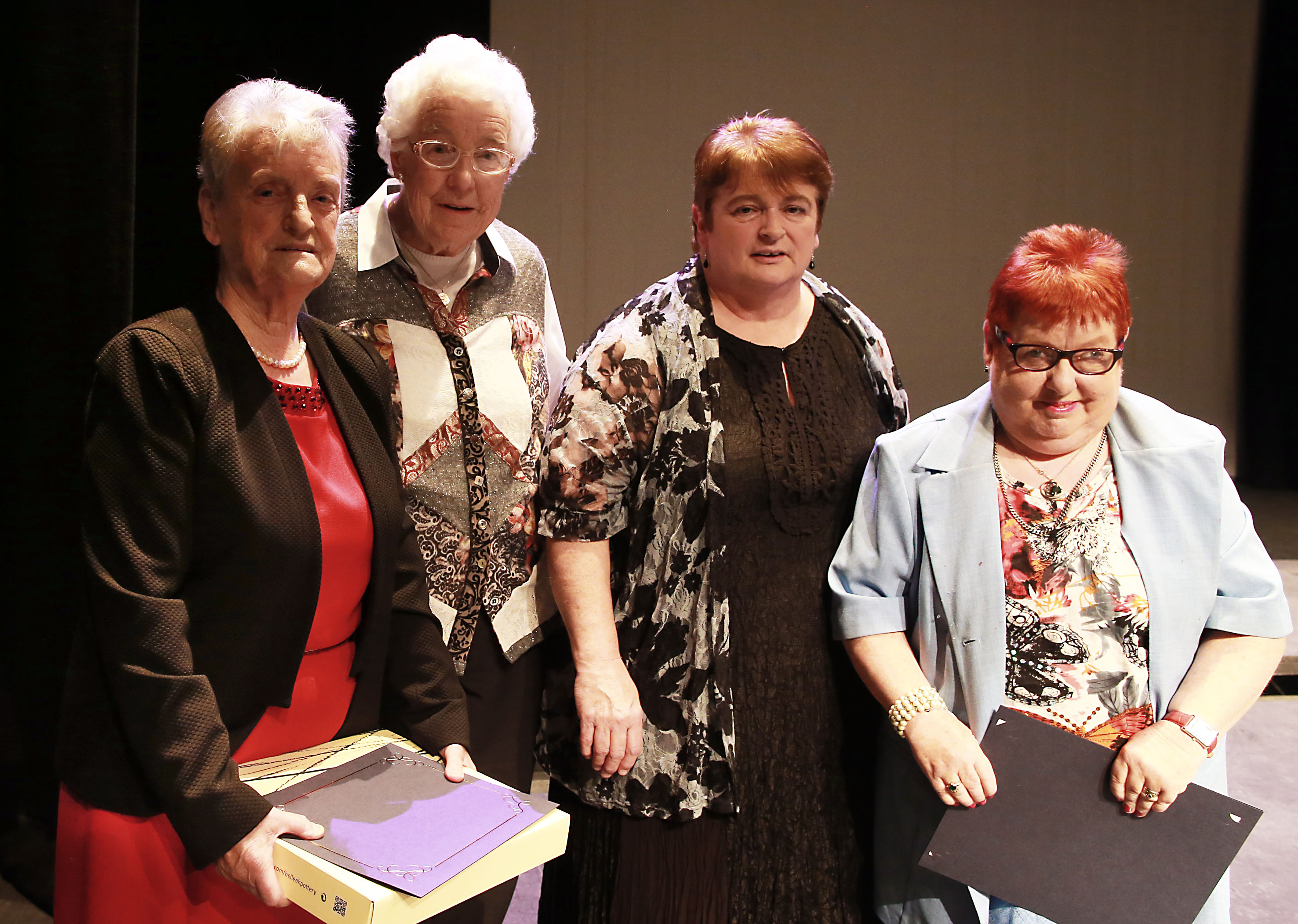 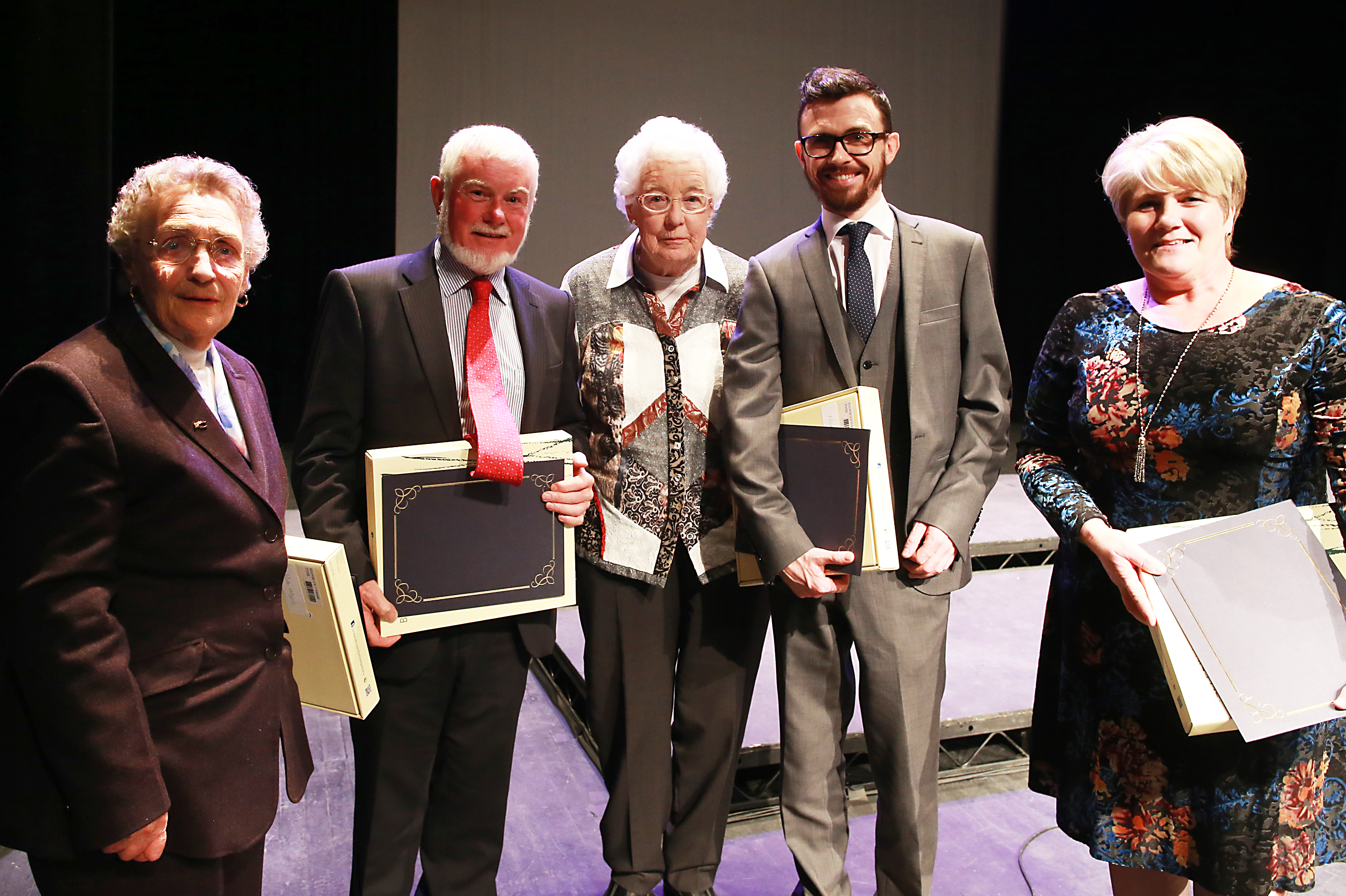 ‘Fermanagh Community Heroes’ in partnership with the Impartial Reporter, was an unranked celebration of good deeds, large and small. All were equally applauded for their extraordinary efforts that make for a better County Fermanagh. What made it even more special was that these 20 people had been nominated by members of the public in the run up to the event.


Chairman of the Fermanagh Trust Frank McManus told the audience, which including Acting First Minister Arlene Foster, Sean Lynch MLA and representatives of the Barrow Cadbury Trust that there had been an “amazing response” from the public for the nomination of heroes. 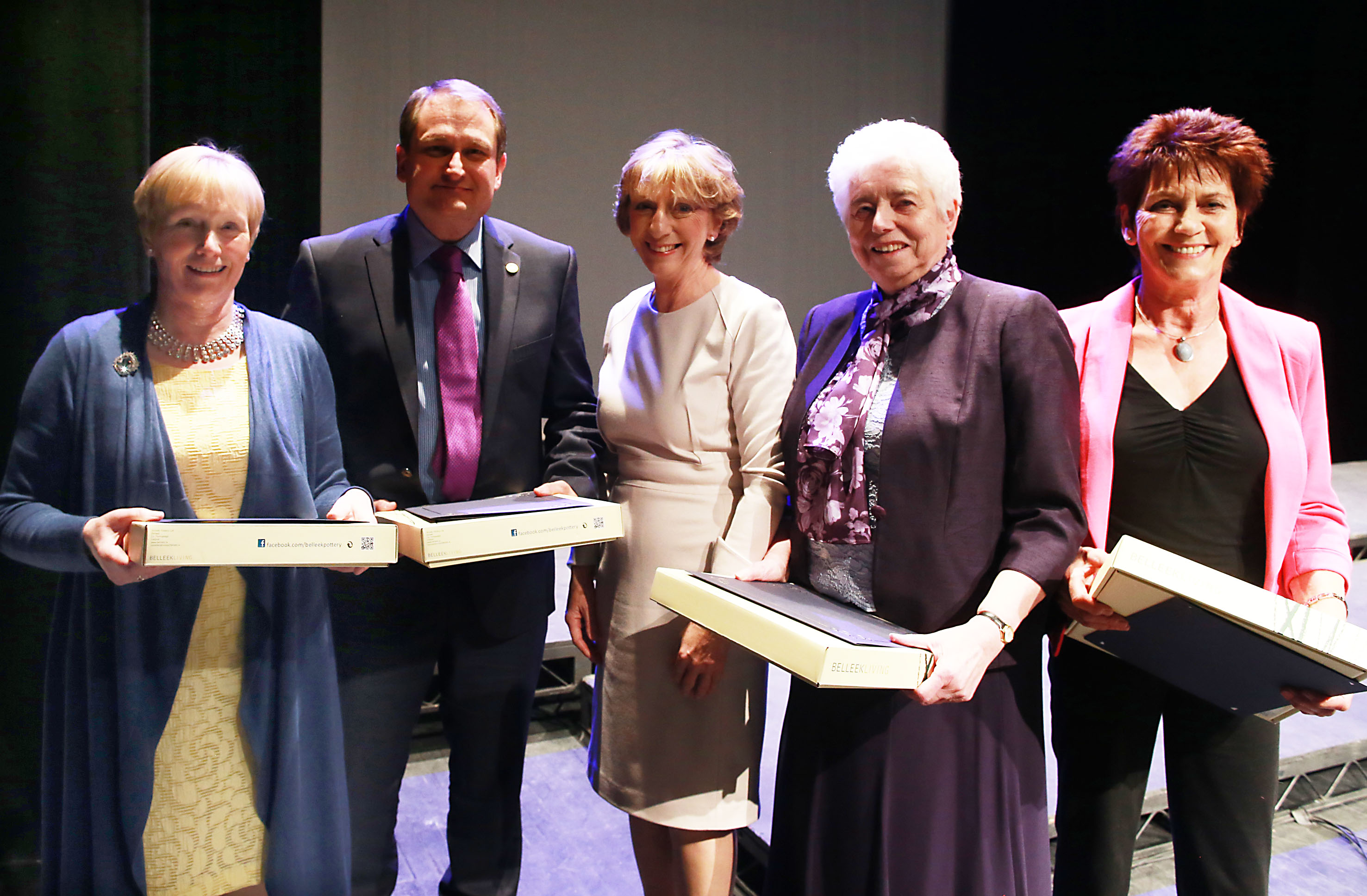 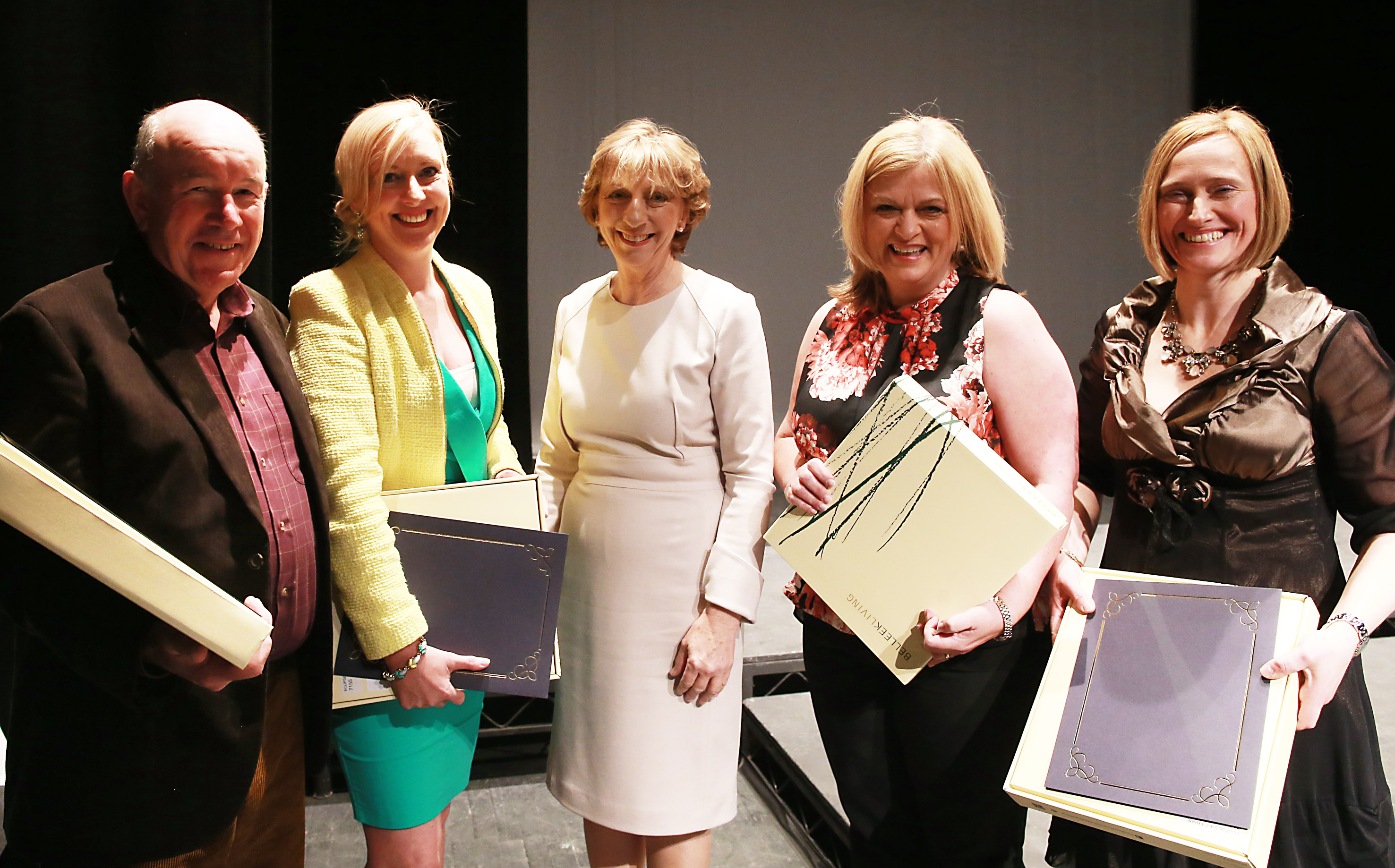 
Lauri McCusker, Director of the Fermanagh Trust said “Our celebration event was a wonderful night with a huge audience, fantastic performances and great atmosphere amongst our colleagues, supporters and especially ‘Community Heroes’. A celebration of 20 heroes, one for each year of the Fermanagh Trust’s existence provided the opportunity to pay tribute to the inspirational volunteers who make a difference in their communities right across Fermanagh.”


Lauri added “It was also a chance to reflect on the Fermanagh Trust’s work and it’s impact on the lives of organisations and people across the County. Thanks to all those who attended and made it a truly memorable night for the Trust.” 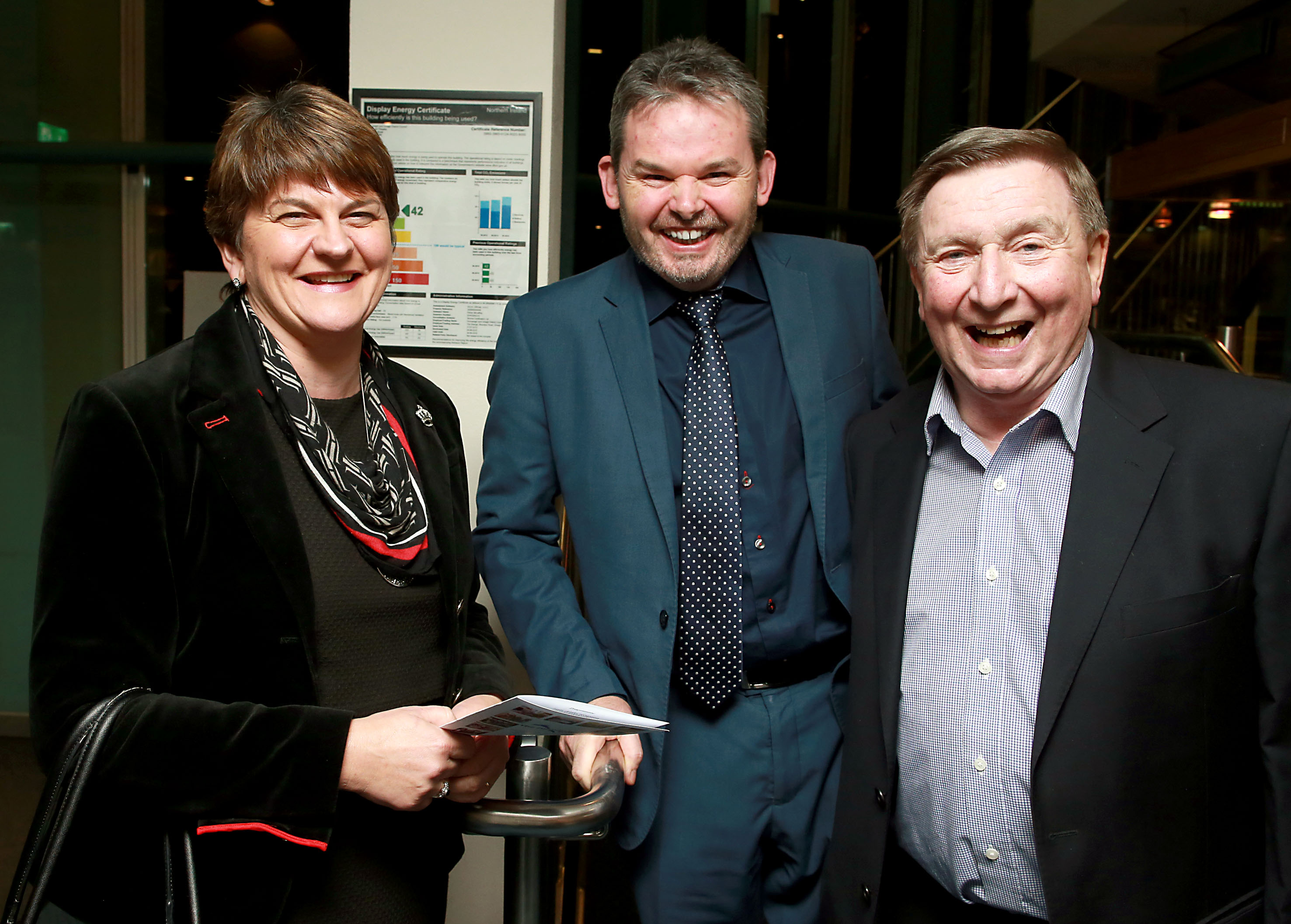 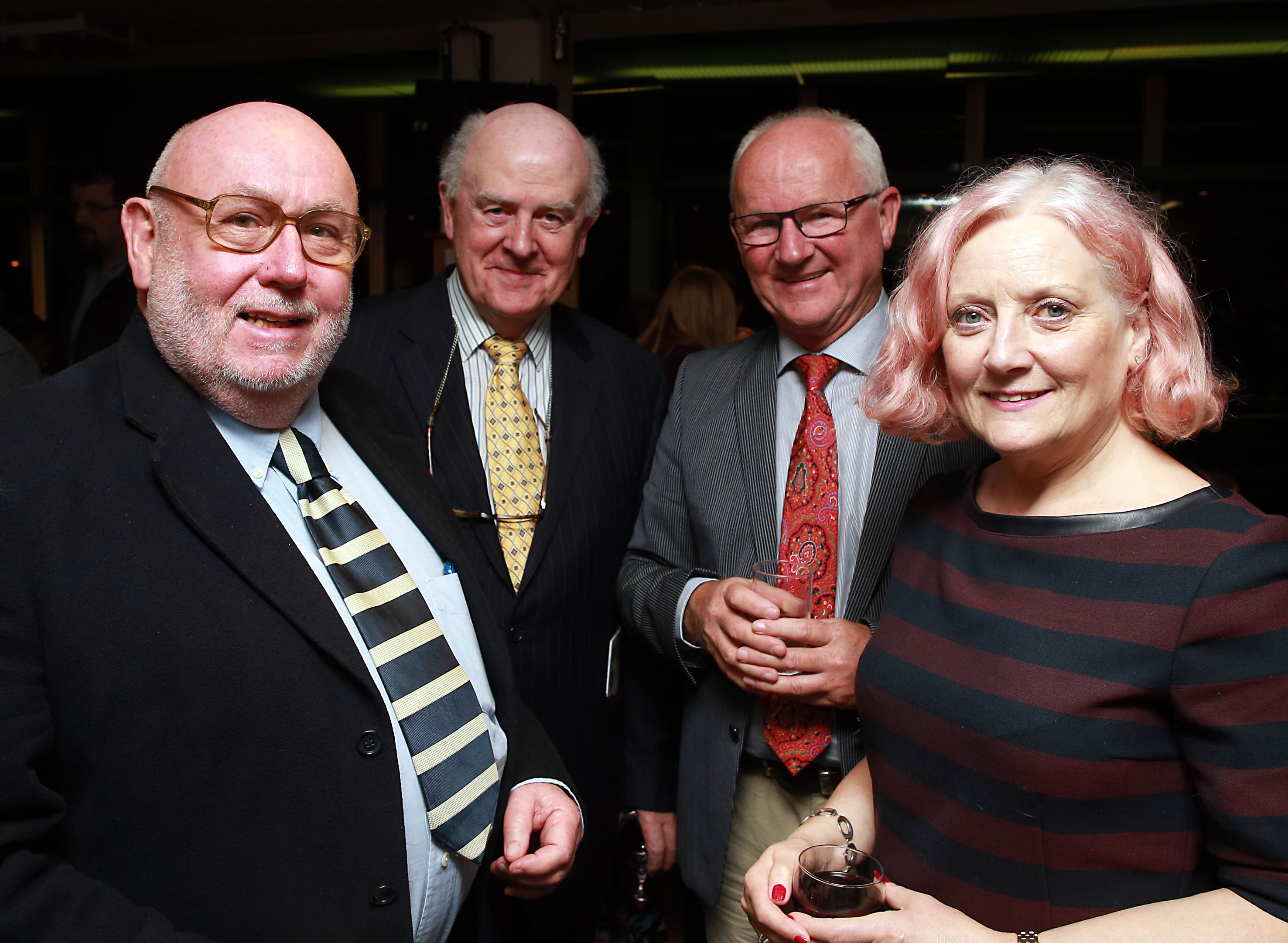 The 20 community heroes awarded on the night were...

3. Eileen Drumm – through Shop Mobility, Women Making Waves, which she set up 16 years ago, Disability Action, North West Forum for People with Disabilities and countless other voluntary organisations, Eileen is assisting hundreds of people and making real positive change.

4. Viola Wiggins – Now in her 80s, Viola has spent a lifetime helping others. As well as raising money for a variety of worthy causes from an early age. She is also a noted local historian who has helped people across the world uncover their Fermanagh roots.

5. Frank McGowan – Tamlaght man Frank McGowan rose to the ranks of Assistant County Commissioner for Fermanagh after initially only filling in as a scout leader in Lisbellaw. During his time as commissioner he oversaw all the groups in the county, giving leadership and providing the youth with important life skills.

6. Niall Greene – Founder of Fermanagh based Community Interest Company ‘Adult ADHD NI’ Niall supports adults diagnosed with ADHD as well as parents of children with ADHD. From humble beginnings the organisation has helped over 200 people across Ireland.

7. Bernie McNulty – Bernie was behind the creation of the Belleek Comhaltas branch. She also chairs the Fermanagh Comhaltas County Board and makes sure she is involved in whatever capacity possible, in the promotion of Irish music.

8. Selwyn Johnston – Enniskillen man Sewlyn of Headhunters Barber Shop and Railway Museum has been instrumental in keeping the spirit of the railways in Fermanagh alive. The museum which is a registered charity with free admission involves people of all ages and and has one of the largest collections of memorabilia in Ireland.

9. Edel Bannon – A founding member of Enniskillen’s Aisling Centre, Sister Edel has been described as a “truly inspiring lady” who gives of herself, her time and her skills”. The Aisling Centre opened in 1990 and Edel managed it until 1995, working diligently to raise funds and to expand services.

10. Pat Hey – Since being named treasurer of Bannagh Community Project in 1991, Pat has played a central role in the organisation and the wide variety of activities that it offers. Mrs Hey has also served with distinction in many other local organisations. Including Bannagh Womens Group

11. Liam Cox – Liam has been a driving force within his small rural area and shown a steadfast commitment to the running of Cavanacarragh Hall as well a number of other projects including Cavanacross Crossroad Millennium Project and the annual townland quiz.

12. Noreen Kettyles – Founder of MeUnLtd, Noreen has developed a range of programmes supporting women carers with children who have learning disabilities. The main aim of Noreen’s work is to empower people to make positive change in their lives.

13. Anna McKenna – Anna’s commitment to children and young people in Kinawley in both the local GAA club and Little Treasures Playgroup has been a key part of her life.Anna has taken on administrative roles at a county level in the GAA and is currently secretary of the Fermanagh LGA.

14. Olivia Cosgrove- While Olivia’s name is synomous with a number of charities she is also well known for inspiring people to use the waterways of Lough Erne. As chairman of ‘Row the Erne’ she has spearheaded volunteers to build a currach and row it.

15. Mark Allen – popular Enniskillen pantomime star Mark who is a stalwart with the Lakeland Players is recognised for “making people laugh”. He is also acknowledged for the many years he has spent as an active scout leader with St Micahel’s Scouts in Enniskillen.

16. Louise McLoughlin –  Louise is passionate for rural community life and is selfless in giving her time and sharing her knowledge. As a member of Boho Community Association Louise helped secure a number of grants. She has also served as Chair of Boho Heritage working on the production of maps, books etc.

17. Jack McKinney and Josie Maguire (joint award) -  Founding members of the Devenish Partnership Forum, Jack and Josie have no plans of stopping their community work! Jack is the treasurer and Josie chairs the DFP which was established to combat high levels of deprivation within 4 Enniskillen housing estates.

18. Joe Mahon – the Irvinestown hotelier is no doubt a force for good in his community. A man whose endeavours every year bring people together and assist those in need, not least the Marie Curie cancer charity which he has helped raise thousands of pounds for. His work during the Lady of the Lake festival plays a significant part in maintaining the town’s strong community spirit.

19. Maud Cunningham – Maud has been an active part of the community exemplifying everything about volunteering and active community work. She helps out with training, specifically in first aid which she teaches to various organisations. Maud is also involved in North West Mountain Rescue Team , her local Church and girl guiding.

20. Ann Orr – Rural life is at the heart of everything Ann Orr is involved in whether its organising Fermanagh County Show, taking entries from breeders or simply helping out in her local community of Topped Mountain or church at Coolbuck. Ann sees her role as promoting women in business, Northern Ireland and its food, preserving the environment and heritage.